Sometimes it’s a matter of luck when it comes to travel – Darcy, Bob, Russell and I were on our tour round the north of England in the latter half of  November 2010, and we could have easily got caught in the snowstorm that swept across the whole of UK, thus putting a damper on our travel plan that had been in place since the summer. Fortunately we managed to be one day ahead of the snow, which meant that we managed to traverse across the Yorkshire Dales from Harrogate to the Lake District without any problem, despite the snow started to come down rather heavily in the morning in Harrogate while we were having our full breakfast at Bettys.

Although it was not difficult to find Cartmel, relying on the GPS to find L’Enclume, esp in the dark, was a bit more challenging. Finally I had to give up searching for it in the cold winter evening, and asked a local resident for directions. We got to L’Enclume, settled in the rather interesting and quirky rooms (the floor was sloping, so it’s as if we were already a bit drunk before we had any alcohol), and then we sipped some champagne (we were not celebrating anything – the bottle was just there in the room to welcome us) before heading to the restaurant for the dinner that we were so looking forward to.

There were two menus on offer, a shorter 8-course menu and a longer 12-course menu. It didn’t really take us long to debate which one we should go for – of course the longer menu!

Pumpkin seed lolly with parsnip crisp were brought out to accompany the bottle of Montagny premier cru that we had chosen.

The amuse bouche was apple macaron with oyster mousse and samphire. It had a nice blend of taste, accented by the sweet apple flavour. 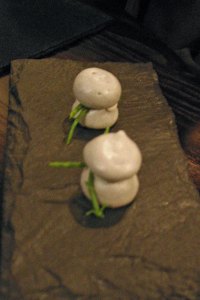 The 2nd course was salt and vinegar crispy rice and cod ‘yolk’, bacon, watercress, cream of egg and garlic. At first taste, I found the dish rather plain, but every subsequent mouthful it just grew on me, and by the time I finished the dish, I just wanted another one. Bob described the dish as “breakfast in a bowl” while Darcy who didn’t like mayonnaise commented that there’s finally a mayonnaise that she could eat!

There were three choices of bread: white flour bread, pumpernickel and molasses in the middle, and the spelt bread on the right.

The next course was turnip root and stems, Reg’s duck wing, vegetable juices with juniper. The sauce had an excellent flavour, though the duck was a bit on the salty side.

The 4th course was lightly smoked Arctic charr, pickled white radish, parsley and fresh salmon roe – the orange colour of the roe versus the green leaves and sauce looked absolutely stunning. The ingredients were fresh and well-balanced, with the charr delicately smoked, and the vinegar from the picked radish complementing the saltiness of the salmon roe. 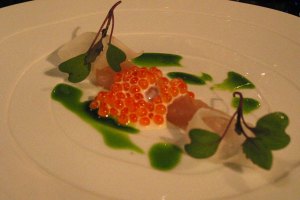 While I am not a big fan of goat cheese, the next course of artichoke flesh and skin, crosnes, fresh goats cheese, farm shoots and tarragon oil had a very creamy goat cheese that I could quite happily eat. It worked well with the other ingredients, especially the light and refreshing artichoke flesh, and the combination of the various textures was impressive. Darcy made the remark that it was a dish that she would need the bread to mop the sauce.

The next beautifully-presented dish was Dublin Bay prawns from Gairlock, wild cabbage, fragrant oil, chervil and toasted millet. The general consensus at the table was that sprinkling of salt on top was slightly heavy-handed.  Personally the prawns were slightly overcooked and the toasted mullets a little too crunchy and flakey for my liking, but nevertheless the dish had an interesting contrast of textures.

We were halfway through the menu and Russell commented that so far the meal was still missing the wow factor – the dishes were good but nothing that jumped out that he thought were exceptional.  The 7th course was vintage potatoes cooked in chicken fat, flaky crab, onion weed and horseradish. Again we all found the dish too salty – it was a shame because the caramelised potatoes in the chicken fat were delicious and blended in well with the crabmeat, and it was spoilt by the saltiness of the sauce. There’s a limit between savoury and salty, and it seemed that the line was crossed in this case. 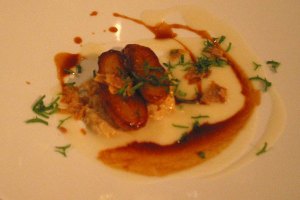 Russell was not a cockles lover but he kept his open mind, secretly hoping that a restaurant like L’Enclume might change his opinion. The next course, skate ‘belly’ with bay cockles, purple azur baked in salt, coastal herbs and cider vinegar, unfortunately didn’t change his opinion on cockles. It was a shame that the dish seemed to have fallen flat on its face – the saltiness theme seemed to have just continued.

The last savoury course was beef rib from Lindal, celeriac, shallot, oxtail and alexanders. It was rich in flavour but the meat was not as tender as it could have been. In terms of presentation, it might have been more elegant if the celeriac actually wrapped round the beef rather than just putting them on top as if it’s like throwing a blanket over.

The pre-dessert / palate cleanser was iced celery and chestnuts, white chocolate and English truffle. Based on our sample of 4 people, it seemed that there’s a gender divide on the opinion of this dish. Darcy liked it a lot and she liked the taste that lingered in the mouth afterwards. Bob and Russell did not like it and thought that it was more like a starter than a pre-dessert dish. I thought the celery might have worked better as a granita – the aftertaste in the mouth was just too strong. The chestnut shavings went well with the white chocolate.

The penultimate course was sea buckthorn, malt, Cumbrian dark beer, liquorice and blackberry powder. While it looked like an exciting dish, the actual taste was a little bit flat for us – maybe we were expecting an explosion of flavours that did not materialise. There was nothing unpleasant about this dish: I tried eating the different bits separately, and also tried eating the combined ingredients in one mouthful, neither method seemed to have made the mark in my mouth. The others all shared my view and felt rather disappointed with this dessert.

The fianl dish was apple sorbet, thyme custard, beetroot and cobnut crisp. While it was nice to have the beetroot adding the texture to the tangy apple sorbet, it did nothing to satisfy Russell who, by this time, said that he’s still waiting for his desserts – in his mind, he’s not had any desserts yet. Darcy commented that she’d prefer this for breakfast.

To finish the meal off, we were given the Douglas fir milkshake and Parkin cake. We weren’t too sure about the milkshare – the taste and texture just reminded me of some medicine (Russell, at this point, said “Milk of Magnesia”). 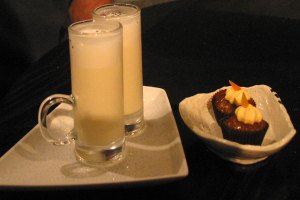 Although some of the dishes, especially the desserts, were a little disappointing, on the whole we were impressed by the quality and freshness of the various ingredients. Also the meal was surprisingly light on the stomach – after 12 courses we actually felt good and happy, rather than having to carry our tummies out of the restaurant! We would certainly go back again – if it’s just for the sake of having a “healthy” meal.