When hurricane Irene struck New York City during the last weekend in August 2011, New York went into an unprecedented shutdown. Not only did the public transport system closed down that weekend, most shops and restaurants decided to stay shut the whole weekend. I’d hate to think the amount of business lost during that weekend, especially when the weather improved dramatically by Sunday morning.

Still, because of the transport limitations and I was staying near Columbus Circle, I decided to go somewhere not too far away for dinner. Fatty Crab on Upper West Side announced on Twitter that they were open on Sunday evening, so that seemed to be a good place to walk to for dinner.

The restaurant was not a typical Malaysian restaurant – the decor and music was very much appealed to the younger trendy Western crowd. The food was “inspired” by Malaysian cuisine (as the restaurant said so on the website) and other neighbouring South-East Asian countries.

Because of the hurricane, it was a reduced menu, but there were still plenty of choices on there. So to start, we opted for Jalan Alor chicken wings, and pork steamed buns. The belly of pork sandwiched in the steamed bun was divine – the flavoursome meat was served with a sweet soya and chilli sauce, with boiled eggs and coriander as garnish.  The chicken wings were coated with a rich glaze of soya sauce – maybe a bit too much sauce but the dish did satisfy my craving for chicken wings that evening. 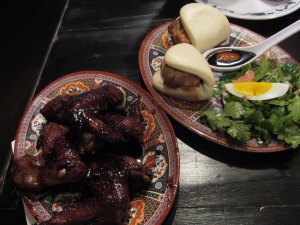 The next dish was Bobo chicken satay with lontong cakes, red onion, peanut sauce. The chicken unfortunately was somewhat too burnt on the outside and without any proper marinade, a bit bland and dry inside.

For the main courses, we chose Fazio Farms Fatty Duck, with pickled mustard greens, gula jawa, thai chili; red curry okra and rice. Unfortunately the duck, which was deep-fried, was so tough and greasy that after two small bites I already felt that I’ve had enough. The okra was somewhat overcooked and just did not look very appealing to go into the mouth.

The meal started on a high with the pork belly in steamed buns and then gradually went downhill from there. Service was warm and friendly without being pretentious – that’s a major plus. The place was vibrant and certainly would make a fun night out with friends, as long as quality of food was not high on your list.