My first visit to Soto, a Japanese restaurant in Lower Manhattan, was actually in April 2012. It was so impressive that I went back with the “usual suspects” of food friends in October, the Saturday before that superstorm Sandy hit Manhattan.

The restaurant was not easy to find, as there was no sign or name outside to indicate the location of the restaurant. So if you do ever visit this place, remember it’s number 357!

The menu was extensive and served a whole range of dishes that sounded delicious enough without even sampling them! The four of us decided to pick with the dishes we really wanted to try, and then go for another round of ordering afterwards – if there were any dishes in the first round of ordering that were really exceptional, we could just ask for another portion in the second round. 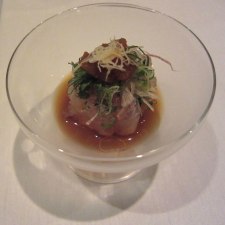 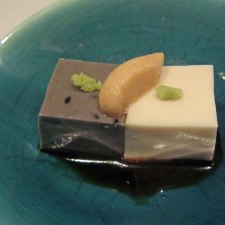 (3)  Uni Tempra with Uni Powder (Deep fried sashimi quality sea urchin in tempura batter, flavoured with home-made uni powder)  was interesting with the sea urchin just melting in the mouth. A first dish that won our hearts and got a repeat in round two of ordering.

(4) Sea Trout Carpaccio (Cured sea trout with black truffle sea salt, chive and caviar, served with watercress with miso mustard sauce and sesame) was so fresh it was almost like eating by the sea. Another dish we simply had to repeat in the second round. 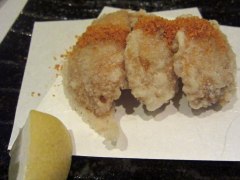 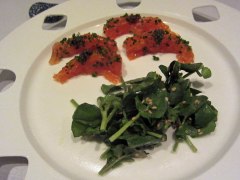 (5) Chawan Mushi (Traditional organic egg custard soup with shrimp, chicken, shiitake mushroom, mitsuba, gingko nuts and yuzu zest) tasted a little bland at the start but the flavour grew with every mouthful of it, and finished off to a very nice memorable taste.

(6) Botan Ebi Tartare (Chopped botan ebi sweet shrimp with fresh ginger, topped with uni served with shiitake dashi broth) had the expected sweet taste of the shrimp. However there was too much of a ginger taste. 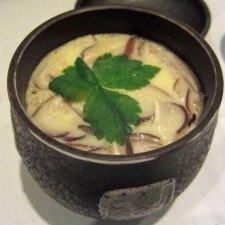 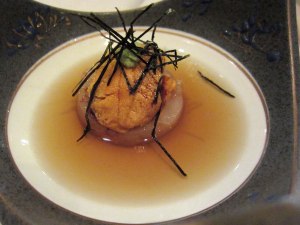 (7) Uni and Yuba (Black soy bean milk skin with finest uni, served with shiitake broth)  was one of the very few disappointing dishes – a lack of flavour of any kind.

(8) Tuna Tartare ( Chopped big eye tuna with pine nuts, asian pear, cucumber, scallion, sesame seed in spicy sesame sauce) was like a fish version of the Korean Yuk Hwe (raw beef), and it was delicious with a nice hint of spiciness. 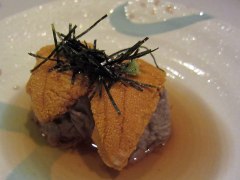 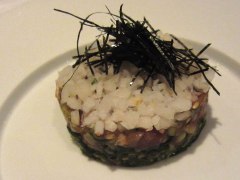 (9) Uzaku (Broiled fresh water eel with tosa vinegar and sweet eel sauce, garnished with japanese cucumber) was the third winning dish for us. The sweetness of the sauce coupled with the delicious eel meant that we simply had to order another one to make sure it was that good – and it was!

(10) Steamed Lobster with Uni Mousse (Layers of steamed Maine lobster and uni mousse in lotus wrap, garnished with smoked uni and caviar) was so beautifully presented that it left us staring at the dish for quite a while, wondering who would have the courage to ruin the piece of edible artwork in front of our eyes. However, the meat of the lobster was a little too cold (maybe we should have stared at the dish for longer to let the meat warm up a bit more) but the sweetness of the uni mousse really lifted the flavour of the dish. 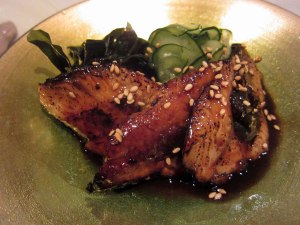 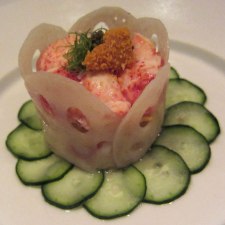 (11) Uni Ika Sugomori Zukuri (Sea urchin wrapped in thinly sliced squid with shiso, served with quail egg and tosa soy reduction) was interesting enough though it lacked the flavour somewhat, which surprised me because I was expecting the sweetness of the sea urchin and the soft-boiled quail egg would really come through in this dish. 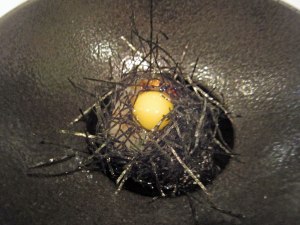 (13) We also had a few pieces of nigiri sushi: Maguro (blue fin tuna from Massachusetts) and Zuwaigani (snow crab from Nova Scotia) were good but not that impressive, while the Anago (sea eel from Nagasaki) had a very slick texture and was absolutely delicious. 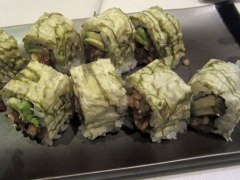 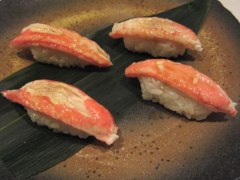 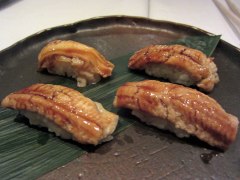 (14) To finish the meal off, it’s a selection of ice-cream mochi. Pleasant and light enough as a dessert. 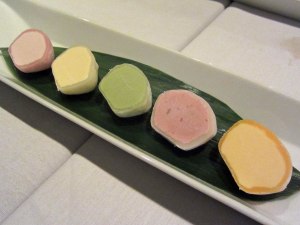 For a restaurant of this high calibre in the middle of Manhattan, the price was not ridiculously expensive. If anything, even with sake thrown into the meal, it cost no more than USD100 per person which was very reasonable indeed. I usually find Japanese restaurants that are Michelin-star-rated in the Western world rather disappointing, but Soto has proven that this is not always the case – if anything, it has become one of my favourite restaurants in New York City for sure.