Shanghai has changed a lot over the years, and with the rise of the new wealth and the hunger for good food, there have been a lot of new exciting restaurants cropping up all over this metropolis. The area of Xintiandi, which did not even exist at the turn of the millenium, has become an affluent area for dining and entertainment in Shanghai. The pedestrianised area with the Shikumen architectural style represents one of the most successful redevelopment models.

It’s one of the restaurants that has been on my radar for a long time, and so I just had to check out this restaurant while I was in Shanghai. In fact, I ended up there twice in one month, so here’s an account on both visits:

The menu was quite extensive but one dish caught my eye straigh away: “Pot Pourri of 18 vegetables” – I could not possibly identify all 18 vegetables but certainly had cucumber, celery, yellow and red peppers and carrots. I was not even sure if there really were 18 different vegetables. However the dish had a nice refreshing dressing to go with it. Then I spotted Xiao Long Bao on the menu, and the crab meat and pork ones were supposed to be the specialty at Ye Shanghai, so I had no choice but to order that also. They were delicious with the pastry holding a generous amount of soup without any problems, and the pastry was not thick either. The soup base  did not leave a greasy flavour in the mouth afterwards – an absolute joy to eat.

For the next few courses, we had Crispy rice with chicken, prawns and mushrooms – this was a bit more bland than I expected, but nevertheless the dish was well cooked; Tianjin cabbage with Jinhua ham which was one of my favourite dishes anyway and my only complaint was that there was  just not enough ham (but there never would be); Dongpo Pork was delicious with a rich sweet soya sauce – the sauce was so nice that I could do with mantou (Chinese steamed buns) to soak up all the gravy, but it’s a shame that they didn’t do mantou.

For dessert, we ordered the Mango Pudding and the Ye Shanghai Steamed Black Sesame Rice-flavoured Cake. The latter looked like a piece of rich chocolate cake, but it was very sticky and gooey, and not a rich flavour at all – in fact it had a delicate flavour of black sesame (a bit like black sesame soup, but smoother), although it was not easy to take the two pieces fo cakes out from the steam basket because of how sticky and wobbly they were. 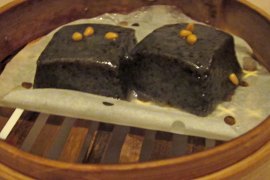 The meal was outstanding – easily one of the best meals I had in Shanghai. The food would have easily scored 9/10. 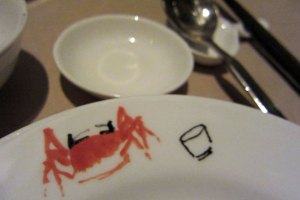 Originally there was not going to be a second visit so soon, but many restaurants were in shutdown mode during Chinese New Year, even in a big city like Shanghai. The original plan of dining at 1221 did not materialise as it was closed, so in the end we decided to go to Ye Shanghai once again, especially because after the first meal we were curious about some of the other dishes. As it was our last meal in Shanghai before heading back to London, we decided to go with the classic Chinese dishes that we liked.

We ordered the Crab Roe Xiao Long Bao – while each dumpling consisted of a generous amount of soup, the flavour of the crab roe was somewhat lacking and, in my opinion, not as good as Nanxiang.

The Peking Duck came in two courses. The first course was the traditional duck skin with pancakes, and then the second course was stir-fried duck meat with lettuce. For the first course, instead of leaving everything for us to assemble, the waitress prepared the pancakes with the duck skin, scallion, cucumber and carrots for us. Nice thought but it took away part of the fun really. Also there was not enough duck but too much accompaniments, and the pancakes were a bit too thick also. For the second course of stir-fried duck meat with lettuce – the stir-fry was a bit more gooey than expected but that actually made the meat less likely to fall out from the lettuce – the flavour wasn’t quite even across the dish, so for certain mouthful the flavour of the duck was lacking.

We also ordered Stir-fried River Prawns, a classic dish that sounded and looked simple to do, but in fact really was a test of the cooking – it was a light refreshing dish, without the cornstarch paste taste that some incompetent restaurants would end up with. We also ordered Shanghai Stir-fried Rice Cakes, which was cooked with pork and vegetables – the dish was OK, nothing to write home about really. However the texture of the rice cake was not as nice as Restaurant 1931’s rice cake.

For the desserts, Russell chose the Mango Sago Cream with Pomelo while I had Glutinous Rice Balls with Osmanthus. Not being a fan of Russell’s dessert, I had a mouthful and it was actually much better than I expected – there was a nice balance of mango and pomelo flavours. For the rice balls, there was a generous amount, and the osmanthus gave the dish a more refined taste. Both were nicer than the desserts from the previous visit. 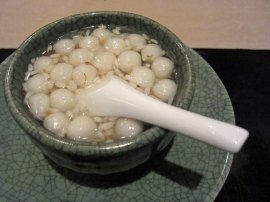 The food at this second visit was somewhat less impressive than the first one, with the Peking duck being a real let-down. But then this is a Shanghainese restaurant and so I should not expect Peking duck to match Dadong or even Quanjude.

This restaurant is a top choice for a nice meal with friends or with business colleagues – beautiful decor and professional service. There is a mixture of classic and modern Chinese dishes to choose from. Definitely a place for me to go back again next time I am in Shanghai.

Din Tai Fung is a Taiwanese restaurant chain, but their xiao long bao is legendary. My godfather swears by it and he thinks that it’s one of the best places to have xiao long bao in the world. So naturally I just have to pay a visit to one of the branches as soon as I got off the plane in Shanghai – and it’s the branch in the Super Brand Mall in Pudong that I visited.

The restaurant was more or less packed even at 5pm! After settling down and ordered a nice pot of tieguanyin tea, it’s the difficult task of choosing the dishes from a menu which consists of mostly steamed buns, dumplings, noodles and other snacks. The list of xiao long bao was quite long and I just wished that I had a stomach large enough to try them all. But that’s not the case and so in the end we opted for:

Goose Liver and Chicken Xiao Long Bao, and Crab Meat and Pork Xiao Long Bao – Both were delicious and better than Minjiang restaurant in London (which should be the case anyway, even though Minjiang does do a mean xiao long bao) as there was less gelatine texture in the soup base inside the dumplings.

We also ordered two of the classic Shanghainese starters: Drunken Chicken which had a nice balance of meat and alcohol flavours; and Smoked Fish which was swimming in a rather sweet sauce.

The beef brisket with noodles soup was good standard fare – nothing spectacular, just comfort food for me. The Crab meat and roe with Pea Shoots was a nice dish, though it was verging on the very expensive side. 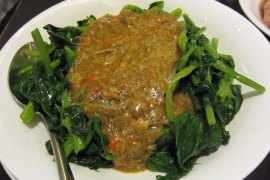 Fortunately none of the dishes were too large, and so we manage to find some more space in the stomach for the Soft gourd and Shrimp Xiao Long Bao. They had less intense flavour than the other xiao long bao we had earlier, but they were more refreshing and certainly not a filling that I had come across before. It was a nice way to finish the meal.

Even though by this point we were quite full, I just couldn’t bear the thought of missing out on the dessert, especially because it  was Red Bean Paste and Chestnut Xiao Long Bao – two of my favourite ingredients in a xiao long bao. They were very different in the sense that there was no soup base in the dumplings to deal with. They were not too sweet and I really enjoyed them, though probably more for the novelty value. 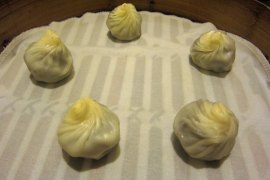 On the whole, it was a very enjoyable dinner. The very informal setting makes it a perfect place to go out with friends and family for a relaxed meal. Is Din Tai Fung’s xiao long bao the best in the world? That’s a matter of opinion – personally after this visit I have managed to sample some other xiao long bao that are better.