It was Nathan Outlaw’s restaurant in Fowey that finished off my Cornwall gourmet trip on a high in 2009, and so in 2010 I have once again chosen Nathan for the grande finale of this year’s SW England foodie tour with my friends Darcy and Bob from the US. I felt this was an appropriate choice given that Darcy was a lover of seafood, and I knew that I couldn’t go far wrong with Nathan with his forte in seafood cooking and his use of local produce – being by the sea really helps!

As the Marina Villa hotel in Fowey was sold off, once again Nathan had to find a new venue to move to. He already has the Seafood & Grill at St Enodoc Hotel in Rock since middle of 2009, so it’s a natural choice to move his flagship restaurant to the same place. For those who are not familiar with the geography of SW England, Rock is in North Cornwall and is located on the opposite side of the Camel Estuary to Padstow. It’s a tough place to be competing with Rick Stein’s well-known seafood empire which dominates Padstow.

The restaurant in Rock had only opened for about 4 weeks when we visited, so certain things still needed to be ironed out, even though most of the staff followed Nathan’s footstep from Fowey to Rock. The sommelier might not be completely familiar with his wines, but he was certainly knowledgeable, and recommended a very nice bottle of Austrian white wine, after I set out the rules of “no Chablis, no Riesling” for the evening. He was even prepared to open a new bottle to let us try a bit first, as I am not a fan of Austrian wine generally – but this was a clever move for him as the wine was light and refreshing, and so we ended up with the bottle to go with the meal.

As it’s the final evening of a week-long gourmet trip and we had a whole day of travelling around sightseeing, we were all too tired to decide what to eat in the a la carte menu, and so we chose the easy way out and opted for the tasting menu.

The first dish that was presented to the table was Smoked Mackerel with pickled vegetables, olive bread and smoked salt. It was beautifully presented (as you can see below). Taste-wise the verdict was mixed – I thought it was good but Russell did not enjoy it too much, but then he was not a fan of mackerel anyway. 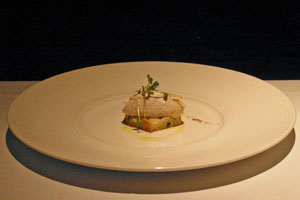 The first 3 courses were all fish – it’s a showcase of Nathan’s skills in cooking seafood: 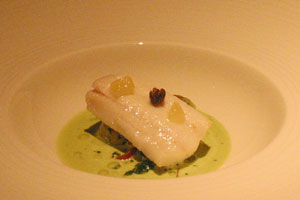 (2) Brill, with angels on horseback, seaweed and squash

(3) Bream, mussels and saffron with olives and tarragon 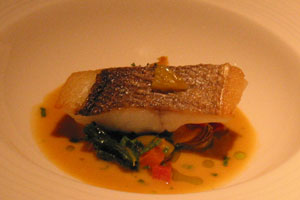 It’s hard to find too many faults with these dishes. The only (slightly) negative comment at the table seemed to be on the brill which was slightly on the dry side and overcooked.

The next course was still around the seafood-theme:

(4) Scallops, with hogs pudding, Jerusalem artichoke and apple. When we finished this course, the staff asked how it was – We all agreed that this was one of the best dishes we had during the trip, as the scallops were very fresh and perfectly cooked. The other ingredients complemented the scallops really well, with no one single ingredient dominating the overall flavour. We were told that the scallops just came in on the day and were only delivered at 4pm.

After four courses of seafood, the next course was a meat course:

(5) Venison, chicory tart with hazelnuts, parsnips and thyme. Nearly every restaurant we went to on this trip featured venison on the menu. This one might not be the best, but then it was very good, with the meat not too dry or overcooked. 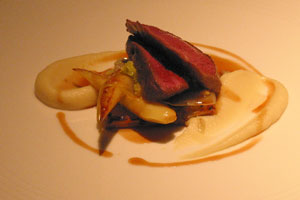 There were 2 desserts that followed: 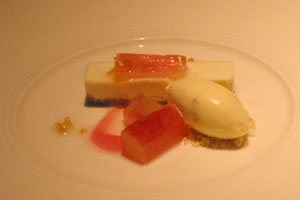 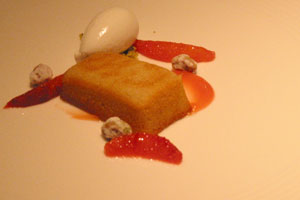 I must admit that I shivered when I saw “ginger cheesecake” and “ginger ice-cream” in one dish – although I love using ginger in cooking savoury food, I am not a fan of ginger biscuits or in desserts. One of the indicators of a great chef (as opposed to a good chef) for me is that he/she can make me enjoy a dish full of ingredients I don’t like. With this ginger cheesecake from Nathan, while I can’t say that I would go back and choose this dessert specifically, I could quite happily eat another one if I had to. So that’s nearly a total success!

The desserts were nice, but lacked that certain edge that made the dishes unforgettable, like the ones I had in Fowey.

It’s probably a bit unfair to try to compare the restaurant at Fowey against the current setting in Rock. After all, the Fowey restaurant had an absolutely stunning unobstructed view – sitting halfway up the hill looking out to the Fowey estuary. The blinds were closed in the restaurant at Rock, but I didn’t expect the view to be anywhere as good. The service was friendly and informal, though some details still needed to be worked on – but this was to be expected given the early days of this venue and certain aspects still needed to be ironed out. In terms of food, the quality was still as good – fresh produce, nicely cooked. However, it lacked the excitement and the “wow” factor at Fowey – Nathan explained that this was due to the smaller number of staff in the kitchen and that limited what he could achieve. This was compensated by the scallops dish at Rock – the dish was so good that everyone at our table agreed that it would be one of our top 10 dishes to die for!

Certainly a restaurant I would look forward to returning to in the near future – in the meantime, the only thing I could do was to tell friends and colleagues heading down to Cornwall to forget about going to Padstow for seafood at one of Rick Stein’s eateries; instead, consider heading to Rock instead for an outstanding dinner at Nathan Outlaw’s.