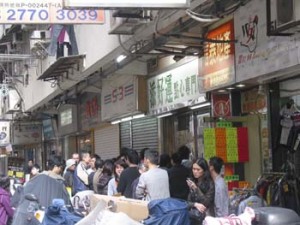 Billed as the cheapest Michelin-starred restaurant in the world, Tim Ho Wan is one of those places you just have to try to see what the fuss is about. So on a business trip to Hong Kong in January 2010, I simple had to go there and see for myself.

I went there first on a Friday at 3pm, thinking naively that it would be well after the lunch break but before everyone finishes work or school, so there shouldn’t be much of a queue – how wrong was I!!!! So I decided to return the next morning instead.

Saturday would always be a risky day to visit this place, knowing that many locals would be making the same trip. I had all the good intention to get there by 9.30am, half an hour before the restaurant opened. But I overslept and only just managed to get there at 10am. There was already a long queue all the way to the end of the street. 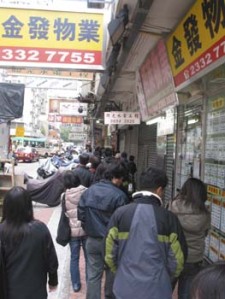 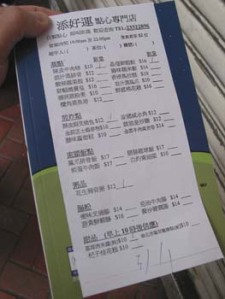 As the restaurant can only hold 20 customers at a time, a member of staff strolled down the queue to give out numbers and jot down the number of people in each group. The couple in front of me, numbered 30, was told that they would have to wait for at a very minimum of 1 hour and they should go for a walk in the neighbourhood and return in an hour. I was the only person in my group no. 31, and I was told that I should stay in the queue in case I could join another table and jump the queue. I was handed over a piece of paper with all the dim sum dishes, and I marked a few dishes that I fancied trying.

As people got their numbers, many disappeared off for a walk round while more people arrived, so the queue hasn’t got any longer. However, by about 10.15, the number had already got up to about 54 (it was a group of young lads from Australia), and by 10.45, the number shot to seventy-something.

Number 1 was called at about 10.50, and then there’s a rush up to no. 7 by about 11.00. Then a few minutes after that my number was called (Thanks to the lady with ticket no. 34 – she was right by the door and heard my number being called) and I was ushered to a table and joined a family of 3. The restaurant itself was tiny – it could only seat about 20 people in total at any one time.

At last minute I decided to add one more dish to my already rather greedy choice of 5 dishes, but I thought it’s worth pigging out just for the energy I used up queueing for an hour.

My first dim sum dish of the peanut and pork ribs congee arrived pretty quickly. The congee had just the right consistency – not thick as a paste, and not watery either. It was beautifully seasoned and the pork just peeled off from the bone easily. It was a promising start. 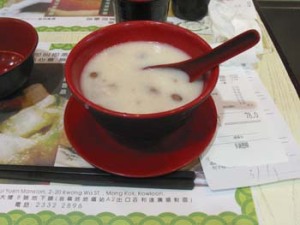 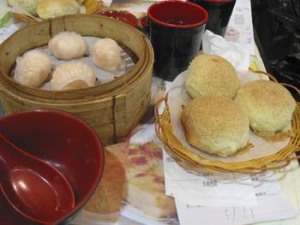 The next 2 dishes came more or less at the same time – the har gau (steamed prawn dumplings) and the main attraction of the restaurant, namely the baked char siu bao (roast pork buns). The dumplings were bursting with large succulent prawns, and were perfectly cooked. The buns were a real winner and did not disappoint – it’s one of the most famous dim sum dishes from this restaurant, and the twist of having a sweet baked topping instead of just the plain old steamed buns works magic – the sweetness of the topping blended in so nicely with the roast pork.

While I was happily and greedily scoffing down all the food, the staff were busy taking orders, delivering freshly made dim sums to the customers, topping up tea (a choice of pu ‘erh or shou mei) and collecting money.

Spring rolls were next – the filling was garlic, cheese and prawn. An interesting combination but I didn’t think it worked well – the garlic and cheese were just too overpowering. 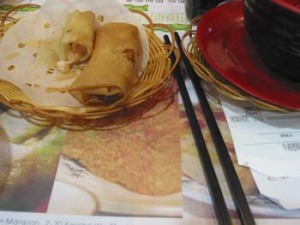 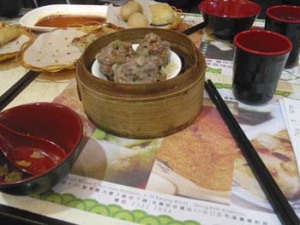 When I finished the first four dishes, it was a rather long wait for the fifth dish – steamed beef balls with orange peel. By this time I was rather full and so I didn’t enjoy the beef balls as much – while it was soft and tender, the texture was actually a bit too soft for my liking…. it was like eating a ball of fat though it was not that greasy. And although I was no longer hungry, I managed to finish the whole dish and once again I was patiently waiting for my last dish, feeling slightly embarassed that I was sitting there with no food in front of me while there was still a large group of customers gathering outside the door waiting for their lucky numbers to be called out and watching everyone in the restaurant eating.

While I was still waiting, the family of 3 got their final order and they put the food into polystyrene boxes that the staff provided. This was the family’s fifth visit to the restaurant, and they recommended the roast pork buns as well as the Chiu Chow dumplings and Turnip cakes. They said that some people started queueing at 8am – so that’s a good 2 hours before the opening time, and that most people with numbers beyond 100 would usually have to wait until late afternoon or early evening before they could even comtemplate of eating here, and number 200 onwards would basically have no chance of eating there. They then left the restaurant at noon and I was then joined by a couple – they were no.18 in the queue!

Finally after about 10 minutes wait, my final dish arrived – it was sago pudding with taro. That was well worth the wait – the sago pudding was perfectly cooked, and the taro paste was smoothly blended into the soup base. 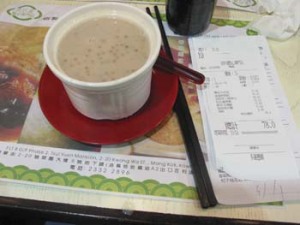 Once I finished the sago pudding, I promptly paid. Six dishes came to a grand total of HKD 78, which works out to HKD13 per dish ie less than USD2 or just over GBP1 per dish. 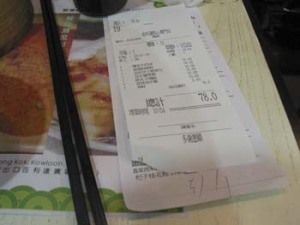 When I walked out of the restaurant, there was still many people gathering outside the door, including Mrs No. 34. I gave her instant feedback on what I thought of the dishes I had, wished her good luck and I departed. 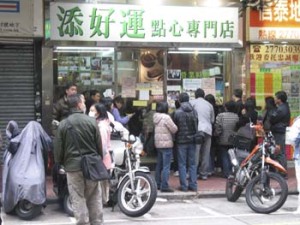 So was it worth a visit? I am two-minded about this. It’s certainly unusual to find a Michelin-starred restaurant so cheap, the quality was very good for this rock-bottom price, and the baked roast pork buns were to die for. However, having to queue for so long (my legs were aching for the rest of the day) and the rather cramped uncomfortable seating, you’d be better off paying a little more, save the time to do other things and eat elsewhere, unless you are prepared to stand for a few hours first thing in the morning to guarantee a seat before lunchtime. Rumour has it that the restaurant will move to a bigger venue after Chinese New Year – it remains to be seen if the expanded restaurant would be able to keep up with this quality.