Originally I was meant to be going into Soho for a quick fix of my sushi craving on a weekday evening with Russell. Then we thought that since it’s early maybe we could get a table at Arbutus without reservation. But as we walked down Soho Square, he said “Oh there’s this new Thai restaurant on Frith Street, shall we go and have a look?” – so somehow a last-minute joint decision meant that we ended up at At Siam (@Siam)!

We were greeted by the staff as soon as we stepped through the door, even though the restaurant already had quite a few customers. The decor was less traditional Thai, but more modern design with a hint of Thai incorporated. The menu was not huge but there were more than enough dishes for us to exercise our brains in choosing.

Our starter was Ruam Mittr, an assorted selection of Thai appetisers with salad. I was surprised by the generous portion, with no less than 8 pieces of the corn fritters for a start – do they somehow know that I just love corn fritters? The yam spring rolls were interesting enough. The chicken satays did not have enough spices in the marinade, resulting in a more bland taste. The prawns and salad on the lettuce leaves tasted good and refreshing. 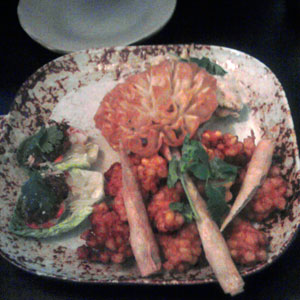 As soon as we finished the platter, we were presented with Yum Pu Nim Tod Krob, which was the battered soft shell crab with chilli jam and mixed vegetable salad. Maybe it would have worked better with the soft shell crab on top of the salad, with the chilli jam on the side, as the batter was rather soggy when we had it. Still, the salad was itself was good, with more unexpected ingredients like pear and pomegranates. 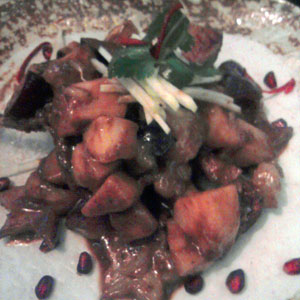 We had two main courses to share: Kae Padd Prik Thai Dum (stir-fried lamb with black peppers and Thai seasoning) and Gaeng Phed Ped Yang (roast duck red curry with lychees and pineapples). Both were nicely flavoured, without the spices being too over-powering. With the sticky rice to accompany these two dishes, there was no leftover.

On the whole this was a welcoming addition to the Thai restaurant brigade in Soho – I more or less gave up eating Thai food in Soho with the demise of Sri Siam and then Thai Pavilion quite a few years ago… But maybe now there’s one that I can go to again.